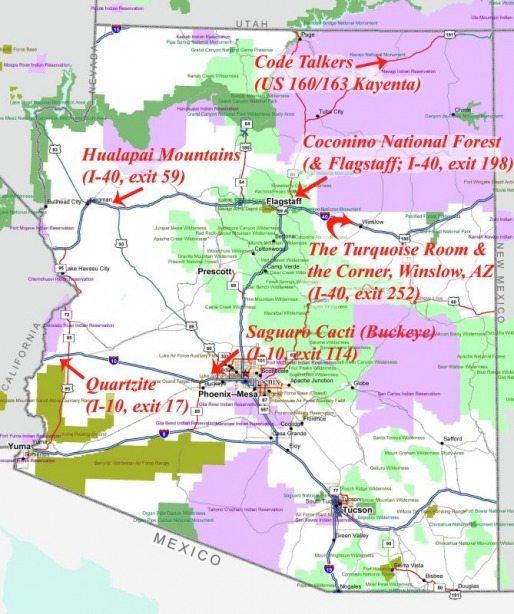 -10, exit 17. C. Park at Pilot. Quartzite. The claim is the world’s largest swap meet. World’s largest RV parking lot anyway. Cynical ‘cause I haven’t explored yet. Intend to. UPDATE:  “Coprolites!” I stage bellowed sauntering towards the display of petrified crap, “You’re shitting me.” This forced a smile, genuine or indulgent I’m not sure, from the gentleman perched beneath the sweat-stained cowboy hat.  So we shot the shit about coprolites, rocks, fossils, and geology. Naturally I bought a handful of his coprolites from the Colorado plateau and I plan to hold onto them (there, I knew it wouldn’t be much of a strain to drop an anal retentive reference, sorry).


I-10, exit 114. MB. Park at Loves. I finally got my saguaro cactus picture. The sun was low in the sky – nearly perfect conditions. I pulled to the side of the highway, hiked a truck length down the shoulder, composed a stereotypical shot, and was then buzzed by a cargo plane straight out of Raiders of the Lost Ark. Really, truly buzzed – directly overhead, very low altitude. Then it banked gracefully over the freeway as if I was shooting with a super-8 camera instead of an SLR. Welcome to trucking: hours, days sometimes, without much of interest and then something spectacular happens and no one is around to say, “Did you see that!?”  But, I got my cactus picture. Not there though. Just up the road from Loves there are lots of cacti in ready-made poses. So again I set out to get my picture. On bike this time. I pass under I-10, past all the cars stacked up on the off-ramp, past the tractor-trailer parked off the side, and just as I start down the dirt road a pick-up truck brakes in the middle of the road and stares me down. Doesn’t say anything, just fixes me with his droopy eyes. “O.k., pardner” I think, and ride over to learn of my transgressions. The closer I get the less he looks like Deputy Dawg.  “This is a private road. It’s clearly marked.” “Not so far,” I point out. “Just over the hill it is, and further down is the air force base,” which, his solemn tone implied, is where Air Force snipers are just itching to light up wayward bicyclists with their .50 calibers. So, I asked where I could ride safely and he grudgingly pointed to the first dirt road on the left (Tonopah-Salome Highway, yes! the dirt road). After a while I veered off under the power lines and found a few trails that led to some majestic cacti. I must have veered off of that path too ‘cause I found a few thorns in my tires the next day. So, watch out for thorns.

I-10. MB, C. Arizona: exit 162. Park at Loves.  Disregard exit 114 (unless desperate). South Mountain Municipal Park (in Phoenix) is the largest municipal park in the country (I’ve been to smaller national parks). Approximately 6 miles to trailhead. I rode the Mormon Loop, failed to loop, went down Mormon and ended up on 24th (street/ave/blvd/who gives a crap what comes after 24th). No complaints, the ride/walk was exhilarating; the hike back up was spectacular. “I thought you would have been long gone,” the hiker said as he overtook me. National Trail at the top of the hill could be a less strenuous alternative. Minor UPDATE: National Trail to the left makes for a longer, less strenuous ride. But, taking Mormon to 24th street is spectacular. Do both, call in sick (or, to paraphrase George Carlin, call in well, as in, "I'm feeling too good to come in to work today").
Wild Horse Casino across the highway from Loves also has truck parking. It also offers fine dining and drinking establishments within. A natty gentleman struggling to stay perched upon his barstool pitched his internet cab service too me. Catching spittle with a backhanded swipe demonstrated that no small detail was unimportant. Sadly, I had to decline his invitation.
To get to South Mountain from Loves ride north to Chandler, then left (west) to 48th and right (north) to the intersection of 48th & Guadalupe (the sign lurks amongst foliage, but the road curves and changes names there). Enter on the road that looks like an entrance to a country club. Trailhead at the end of the road.

I-40. MB. Arizona: exit 48. Park at TA. Monolith Gardens. ​The irony of picturesque places is that your pictures won't come anywhere close to what you saw. Join the club. Have my membership card, I insist. Had a fun ride nevertheless (I like words like that - glue a bunch of them together like the Germans do. Like count pretty high, will have to monitor that). I rode in December, 32 degrees out, blowing, and uphill to the trailhead. I know, I know, but that day 32 degrees was cold (I have frozen my ass off in Seattle at 60 degrees, and conversely felt like stripping naked at 32 degrees in Georgia). Ridiculously close to TA though, so I made it.
Anyway, Monolith Gardens is a nice system of moderate trails and beautiful monolithic hunks of rock. Had me some fun bombing up, down, and around them before eventually frightening a jack rabbit into flight. It was still early enough in the morning (the magic hour) that his ears glowed translucently pink. Camera firmly holstered. (Jackass, er, rabbit.)
​So, nothing technical, you really have to deviate from the path if you plan to fall on some rocks. Regardless, anything imposing can be avoided without dismounting.​ Head north out of TA for a block, turn left at Chevron and follow to trailhead.

MB. I-40, exit 59. Park at Loves. Hualapai Mountains. Take the overpass across I-40. To the right is Bureau of Land Management (BLM) land with enough trails to get your kicks. The main road goes to a mountain park (8 miles I think, uphill); I haven’t gone that far – someday maybe.

B, MB, D (and probably C). I-40, exit 198. Park at Little America (alternate parking on frontage road north of I-40). Flagstaff, Arizona & Coconino National Forrest. Flagstaff has an extensive bike path system. Ironically, the easiest way to access it is by taking a left out of Little America and riding the sidewalk (facing oncoming traffic) which after a couple of blocks transforms into the main bike path. Take a right under the underpass and follow west to downtown, or wherever; or take a right (north) at the hot dog stand (Switzer Canyon Drive), right San Francisco street, right Forrest street and turn onto path at McPherson Park. Ride through park to Buffalo Park. Ride straight through to Coconino National Forrest.The tourist info building is downtown in the old train station; the nice ladies there would be happy to tell you where to go (to find the good eats). We ate at a Thai place south of the info building (on Beaver Street, I think), but I neglected to jot down the name.

D, C. I-40, 252. Arizona: exit 252 (eastbound), 257 (westbound) I-40 Business Loop, aka Route 66.  Winslow, Arizona. Park in front of La Posada Hotel on the street (303 E. 2nd, aka Route. 66) or Flying J. We damn near settled for the next greasy spoon or fast food joint along the strip when we discovered the Turquoise Room in La Posada Hotel. Luckily we landed during the lunch hour (they’re open 11:00-14:00, and 17:00-21:00, but remember Arizonans are nonconformists in daylight savings time matters). This is what I mean by fine dining. The hotel also has fine art shows (can’t think of the accurate term, my mind is a blank canvas). But save time to get your picture taken on the official Winslow corner with the official statue. They even pump the song out onto the street to help with the mood.


​US-89
MB, B.  Arizona: Park at big dirt turn-out just over the bridge. Rim Trail is not an internet hoax like I was beginning to suspect. I sampled several mountain biking sites and each one sent me to an opposite corner of the town. Eventually, I asked the kids (everybody’s a kid these days, must be getting on in years) behind the desk at the Page/Lake Powell RV campground and they steered me towards another dubious trailhead. I went up the hill, prospected a few jeep trails, and was about to conclude that the jeep trails were the “mountain bike” trails. But I made one last half-hearted stab and found a bona-fide trailhead, replete with no signage leading up to it. There are mile posts, etc once on the trail, so that was comforting. So, I recommend skipping the sightseeing (except from the bridge, of course) and head up the highway then take the second road on the left (N. Navajo Drive) . The trail bisects the road at the crosswalk – can’t miss.
ss from Hoover Dam Lodge & Casino. Look both ways, like your mother advised, then cross the highway to the sw corner of the HDL&C parking lot, then almost under the heliport is the trail to Hoover Dam. I suppose you could hike it, but biking is light years faster. Bighorn sheep populate the area and I have seen them (when driving). Of course, Lake Mead dominates the landscape to the west. Probably not much that I can add that hasn't already been said about the monumental achievement of the damn. Did have a standoff with a pair of bugs on the way back - really! They charged me, waving menacing antennae. 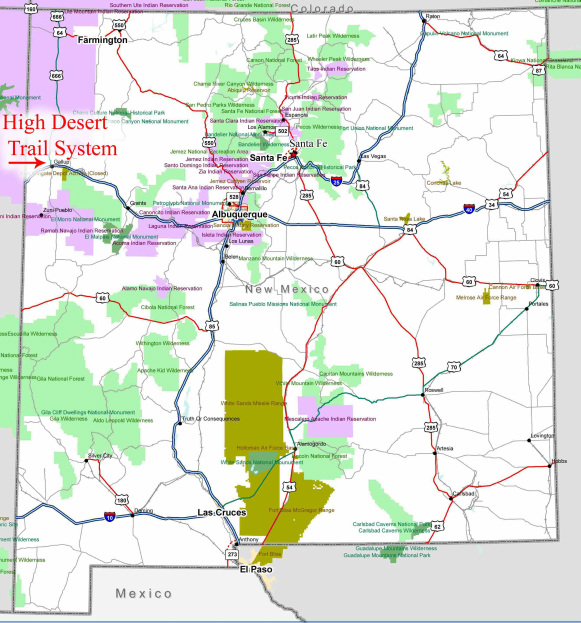 MB. New Mexico: exit 16. Park at Loves, or TA. The High Desert Trail System is a breathtaking portal into the Land of Enchantment. Mesas rise up from the desert, seducing you with a dance of up, down, and around; up, down, and around; until suddenly the music changes and a sheer cliff cuts in, testing your devotion to staying on the trail, and alive. After two instant surges of adrenaline, I suspended my photo searches. Overall though, the High Desert Trail isn’t particularly treacherous. But I recommend paying attention.

On the other hand, if I had paid closer attention to my directions I would have missed out on some local color. While looking for the obvious trail (which I overshot by a mile, literally) I had a standoff with a wild horse. He stopped eating to stare me down. When he resumed eating, I pedaled forward. He abruptly stopped eating, and fixed me in place. He was healthy, alert, and wasn’t about to tolerate a human trespasser, especially in the presence of his honey.

The Navajo Nation is larger than 10 states, larger than some of them combined. Navajo language can be heard on the radio, and in conversations overheard. Further north and a few years earlier, I helped a couple of Navajo gentlemen unload cabinets from my trailer. One gentleman was gregarious, so I felt comfortable enough to ask him what language they were speaking. “Ho,” he answered. “Navajo,” he said patiently, a language his grade school teacher attempted to wash out of his mouth with soap. “Now,” he said “kids have to know it to graduate.”

Going the other direction I ran into a Navajo Nation policeman. When he produced a map of the trail I thought, bingo! outing salvaged. So, I pedaled away and came across a probable illegal dump.  Resting among the strewn appliances, tires, mattresses, and black bags of garbage, were the severed heads of a pair of javelinas. Javelinas are peccaries, the only wild pigs native to America. Whereas feral hogs are a problem in many states, javelinasaren’t generally a nuisance.

Thankfully, I had enough time for all these detours and eventually found the trail. So, the most direct route to the trail is turn right out of the truck stop, turn right on Mentamore Street, follow it until it turns into a dirt road, and just over the hill is the trailhead.